Champlain Valley Women
Search
AUTO TOURS --- Across the Country or Around the County
PAGEANTS --- At the Nation's Capitol or In a Mountain Field
Even after suffrage was achieved, women continued to use pageants to draw attention to other women's issues, such as Equal Rights. Left: 1923 Pageant in Colorado Springs. Right: 1924 Forward Into Light pageant was in Lewis, NY.
PARADES
​BROOM BRIGADES --- A Military-Style Drill for Women

​In the 1880s, women performed military-style drills in "Broom Brigades."  This was a way to show that women could engage in traditionally male activities, and do it with style and precision.  It promoted the idea of women in sports and physical activities where they had been excluded. 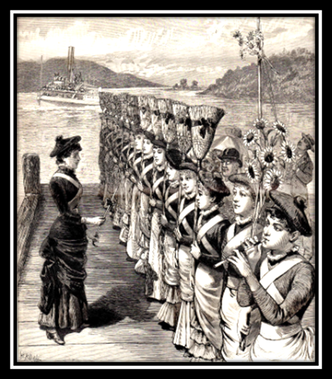 ​
The "Sunflower Brigade" was a broom brigade that performed at Hulett's Landing on Lake George as people watched from passing boats and the ferry.